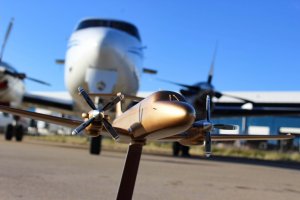 There’s something shiny going around the Ameriflight bases. No, it’s not jewels or coins – it’s something better. A finely crafted model airplane painted with nothing less than the best, gold.

Meet the Golden Airplane. A trophy-like award that travels to a different Ameriflight base each month and is presented as a symbol of the continued hard work and progression of the particular team.

Ameriflight President and CEO Paul Chase says the idea for the Golden Airplane Award was a collaborative effort between him and the Senior Leadership Team. They were looking for a way to show their appreciation to the dedicated and hardworking performers at Ameriflight and a golden airplane seemed fitting.

“It started as an idea to reward great performance. As a ‘can-do’ type of organization, we tend to focus our efforts on solving problems versus ensuring we’re recognizing success. I believe both are critically important to our corporate culture,” explains Paul. “We knew the idea needed to be symbolic yet fun….what is more symbolic and fun than a solid gold aircraft trophy! To keep costs low we opted to not use solid gold and instead went with the finest gold spray paint we could find.”

There’s more to the award than just displaying a golden plane at a chosen base each month. It’s the message behind the plane that Paul wants the awarded team to take away. It’s about instilling a feeling of pride and recognition for a team that works hard each month to meet their goals. 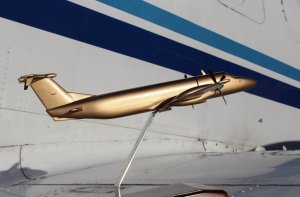 “As I’m sure most employees realize, it’s really not about the airplane as much as it is about demonstrating appreciation and comradery around exceptional performance. Part of my job is to help craft a culture of engagement and ownership so we can deliver on the expectations of our customers,” said Paul.

With that in mind, the Golden Airplane made its first appearance in Puerto Rico (SJU and BQN) back in July. With a few rocky months prior, Base Manager Javier Vachier said receiving the award was exactly what his team needed at the time.

“It was very special to receive the Golden Airplane Award, not only for me but for the group as a whole. Those prior months were very tough for our team. Our performance had been suffering. But thanks to Mr. Paul Chase and our leadership team who came up with a very aggressive action plan, we were able to turn everything around. Receiving the Golden Airplane Award after that really meant a lot to all the employees and the performance of the bases,” said Javier.

The criteria for what base is awarded the gold-laden airplane boils down to numbers. However, it’s not uncommon that in a particular month many of Ameriflight’s bases have perfect safety records and near perfect on-time performance. In that case, Paul takes into consideration a few other factors sprinkled with a little of his own discretion, too.

“It’s primarily based on compliance/safety record and on-time performance. I often joke in our morning ops call that that its 90% metric driven and 10% CEO discretion. I consider what challenges they’ve faced, were they consistently excellent month over month or do we have a base which has seen such an exceptional improvement month over month that they need to be recognized,” said Paul.

The awarded teams don’t just get a golden airplane shipped to them in a box. While conflicting and busy schedules sometimes prevent this, members of the Ameriflight executive leadership team make a point to hand deliver the award to the base, provide dinner and personally thank the team. Paul says it’s one of his favorite meetings to take part in.

Other bases to receive the award this year include Seattle (BFI) in August, Buffalo (BUF) in September and Portland (PDX) in October.

“I think the Golden Airplane Award is a great way to motivate the bases to do better, come up with new ideas and encourage us to think outside the box. Hopefully other AMF bases react as positively as all the Puerto Rico employees did in regards to the award,” said Javier.

Looking ahead, Paul wants to continue to award and recognize those bases and teams who go above and beyond. To continue to grow company culture and instill a sense of pride for the dedicated work Ameriflight employees take part in every day.

“The Golden Airplane Award is a symbol of our new culture. One of excellence, employee experience and superior service,” said Paul. 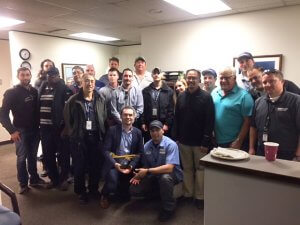 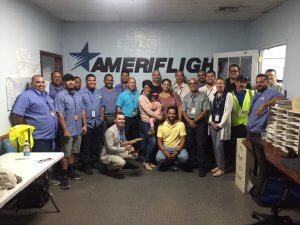