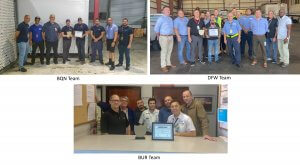 There’s something new being passed around the bases at Ameriflight. It’s gold and shiny, and not to be confused with the Golden Airplane Award, this award is about Safety. Representing teamwork, excellence, and an efficient and safe operation, this is the Golden Shield Award.

Safety is a core value at Ameriflight and paramount to how we operate as a company. Our success relies on safe operations and safe work practices which is part of the reason the Golden Shield Award was created.

“The idea of the Golden Shield Award came from the desire to strengthen the safety culture at Ameriflight. Recognizing excellence in the work that is done at Ameriflight is critical to that. Over the past year, we have been recognizing exceptional base performance with the Golden Airplane Award. The Golden Shield Award is an extension of that idea with the emphasis on excellence in safety,” explained Matt Payne, Director of Safety.

Matt Payne explained how each of the bases stood out to win the award.

“BQN was the first base to receive the award. Their strong safety climate resulted in near perfect Safety Team participation for the month. BQN takes great pride in their space, their hangar is always well maintained and organized. The BQN team continues to set the bar for safety and excellence which is why they were awarded the Golden Shield a second time.”

“The DFW team was the second group to receive the award because of the quality of teamwork and coordination that occurs across all departments.”

“BUR / ONT bases were the third to receive the award. What set them apart was the amount and types of hazard reports that we received. Their reports always included actions that were taken to remove the hazard. This often-included coordinating efforts on various aircraft ramps with our customers.”

Some of the criteria considered when choosing the winning base includes overall compliance, Safety Team participation, best looking planes and facilities, number of hazard reports or safety suggestions, and number of safety shout outs and impressions.

“Being awarded the Golden Shield Award shows that the company takes interest and supports the efforts for improvement. It is a positive step in working towards a safer environment,” said Steve Grinde, DFW Maintenance Manager.

One of the main goals with the Golden Shield award is to not only recognize excellence but encourage all employees to make safety a top priority. Not just the employees flying the line or working in the hangar, but support staff, training staff, and other office employees as well.

“Changing a company’s safety culture can be difficult and often takes a long time. My goal is to create a sense of pride for the winning base and a desire to strive for excellence for the bases that have not yet won. When striving for excellence in safety, accidents and injuries will naturally decrease,” said Matt.

“In my time here at Ameriflight, I’ve watched the Safety team grow closer to our department. They’ve implemented the Safety Ambassador Program that addresses many issues on various levels. They are doing a great job in helping us identify the potential risks and hazards we face on the job. Big thanks to Craig Stanton and Matt Payne for recognizing our efforts to improve,” said Steve.

At the end of the day, success for Ameriflight means all employees going home safely and that comes down to our employees being safety conscious and situationally aware. The Golden Shield Award is just one way for Ameriflight to recognize and award the bases and employees who continuously go above and beyond to make sure daily operations are safe.

Congrats to the three bases who have received the Golden Shield Award thus far. Keep up the excellent work and remember, Safety Above All! 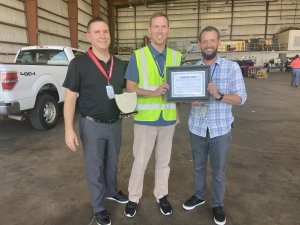 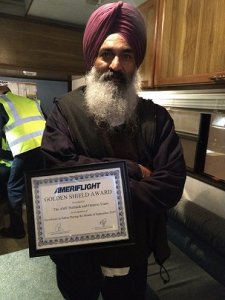