Landing In Aviation With Lydia Kost

This is how Lydia Kost landed in aviation. 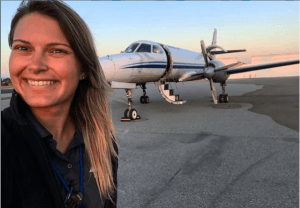 My journey through aviation started in high school, a little later than most. I grew up 20 minutes outside of Louisville, KY, the headquarters for UPS Airlines. My dad started working at UPS when he was in college and has been there ever since. I saw how a career there shaped him and our family and knew I wanted to be there someday, too; I just wasn’t sure in what capacity. 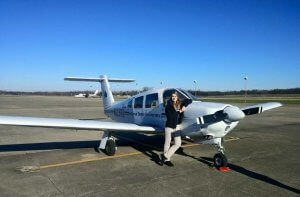 It wasn’t until high school when I was trying to figure out what to do for college that I found flying. I always loved traveling and a family friend suggested that I pursue aviation. As luck would have it, my high school was connected to a vocational school.

When I took my first flight, I knew that flying was what I wanted to do. During my junior and senior years of high school, I obtained my private pilot certificate through my local flight school at Clark County Airport. Finding my love for aviation finally made me realize how I would fulfill my dream of being at UPS one day; as a pilot.

I attended Indiana State University and double majored in Professional Aviation Flight Technology and Aviation Management with a minor in Unmanned Systems. While attending school, I progressed my ratings and spent every summer flying and getting ahead of my course load. 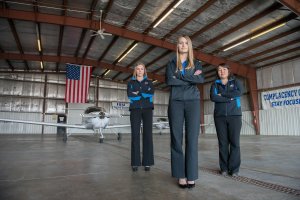 To help prepare myself for instructing as a CFI, I became a ground instructor in the ISU simulator lab. Once I finished my CFI certificate, I started working at ISU’s flight academy. My first summer there, I was chosen to participate in the all-women’s Air Race Classic. Prior to the race starting, I received an email explaining that the internship program at UPS Airlines was being rebooted. I remember racing back to the hotel, cleaning up my resume, finishing the application, and submitting it, all before the next race session. We completed the race in second place overall and collegiately. About a month later, while volunteering at EAA Airventure, I received the news that I had been chosen to be one of the first three interns in the UPS Internship Program.

I started my internship at UPS Airlines in September of 2016 in the A300 Flight Training Department. While finishing up my degree I was able to get acclimated to the UPS Office and working at an airline. One of the best things about working at UPS was that I was never treated as just an intern; my opinions were heard and often asked for. It blew my mind that 30-year UPS employees were asking for my opinion. That quality immediately affirmed my dream to work there.

After graduating from ISU, I was able to focus fully on my internship and take on more responsibilities. I began giving simulator tours to small groups and occasionally potential customers. I even organized college visits, including one with my alma mater. I also began flying outside of work with a local flight club in the Louisville area called Flight Club 502.

As I continued building my flight hours and working at my internship, my mentors at UPS were working to find a way to get us interns back to UPS as pilots as quickly as possible. Previously, it had taken UPS interns 10 to 15 years to make it back as a pilot, regardless of what path they took. UPS started looking at other options and discussing possible flow through programs with other airlines and I was lucky to assist in the process of making the agreement between UPS and Ameriflight. I was also lucky enough to be one of the first applicants to start this journey.

I started at Ameriflight in June of 2017 as a First Officer in the Beechcraft 99 through the UPS® FlightPath Program. Me and one other UPS Intern were in a class with 20 other students, most of which were older and more experienced than us. I was pretty nervous to say the least. When class started, I quickly realized what everyone meant when they said, ‘the schoolhouse is a firehose of knowledge.’ I felt as though I was barely keeping up as I tried to sift through all the information that was given to us. However, over the course of training I built up the confidence I needed to fight off my insecurities and ultimately pass training.

While a First Officer I moved around a lot. I flew in Ontario, CA, Dallas, TX, San Antonio, TX, and Albuquerque, NM. I stayed in Albuquerque until I built up enough time to transition to a VFR BE99 Captain. After gaining enough flight time and passing training and my checkride, I was sent to Salt Lake City, UT to build my time up to the IFR Captain requirement of 1,200 hours. In July of 2018, I completed and passed my checkride and could finally call myself a true BE99 Captain. My next stop was moving to my new, and current base, DFW.

As I started flying the BE99 out of DFW, I decided my next goal was to become a Training Captain. I checked that goal off my list and began training pilots at Ameriflight on the BE99. As I continued to increase my flight hours, I knew the time of upgrading to a type-rated aircraft was near. I didn’t want to leave DFW, but openings in Dallas were hard to come by. I kept checking for open bids, and the day finally came, a DFW Captain spot in the Metroliner was available.

I applied and was awarded the Metro Captain bid based at DFW and was sent back to the schoolhouse. Metro training was by far the hardest obstacle to complete. The Metro is a complicated aircraft, but I was determined to continue this journey that I had worked so hard for. After finally making it to the checkride, I passed and was given my first type rating.

Flying the Metro has come with its ups, downs, and difficulties. I’ve pushed myself and learned from my mistakes, but at the end of the day when I land and walk away from the airplane, I feel a great sense of satisfaction and accomplishment. I continue to swap between flying the BE99 and Metro, and I can tell the difference in my flying skills since upgrading to the Metro. My skills are sharper, my scan is faster, and my decision making is quicker.

I often get asked on social media by current and future aviators how they can follow the same path I did. My advice to those people is to fly as much as you can and gain as much experience as you can; fly at high altitudes, fly in weather, push your limits if you’re comfortable, and become an instructor. Don’t settle flying one kind of airplane. Fly as many types as you can and learn the differences between them. Aviation is always growing and changing and that means we can never stop learning. As a mentor of mine has told me time and time again, “Nobody cares about your career but you.” That means that only you can control your career, you must do what’s best. Set goals, work hard, and never give up. The work is worth it.

Previously we featured First Officer Terrence Braddock. Click here to read how he landed in aviation!