Landing In Aviation With Riki Beauchamp

This is how Captain Riki Beauchamp landed in aviation. 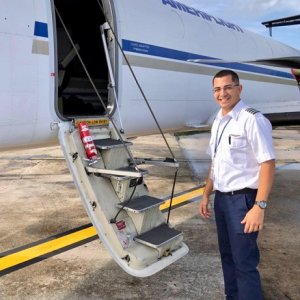 I’ve been involved in the aviation industry since I was a little kid. Occasionally my parents would take me to an airport near our home to see the planes take off, land and to just talk about airplane stuff. Funny thing, that airport was Aguadilla (BQN) airport, which is the airport I was based out of when I first started my career at Ameriflight.

During high school, I decided to ask my parents if they could take me to do a demo flight. I could tell they were scared and nervous, but I also knew they would support me. They agreed, and that Saturday afternoon as I was walking to the airplane, I told myself “I will turn this into my future.” We took the runway and departed to a nearby practice area where we did some maneuvers, basic communication procedures and some takeoffs and landings. As soon as the flight ended, I was 200% sure that I wanted to make this my career, and that’s exactly what I did.

I attended and graduated from Inter American University of Puerto Rico with an Aircraft System Management degree. Luckily, I started ground school and flight lessons at the same time, which was a big help in understanding the topics in class. February 8, 2016 is one of the most important days in my career. It’s when I became a Flight Instructor at Inter American University of Puerto Rico.

It is common knowledge that the best way to learn a subject is to teach someone else. There’s no doubt that holds true in aviation. By working as a flight instructor, my knowledge and flight proficiency increased every day. Teaching other people how to fly is such an enriching experience to me. I also taught ground school at Horizon Aviation Flight School at night. I truly had the full CFI experience.

Like any great journey, I experienced challenges and struggles along the way, too. In the middle of my private pilot course, I realized that my savings would not allow me to finish my private course. I started working on the side, doing random jobs to make sure I had enough money to make my dreams happen. I worked the redeye shift at an airline, washed cars, did part time work at the airport as a ramp agent, and almost anything else that would help me out. Of course, I was frustrated, but I never gave up and continued to focus on my end goal. The best part of any challenging time is when you finally start feeling all the hard work and effort pay off, which I finally did.

As the time passed, I began searching for a bigger, faster, and more challenging assignment. I had a conversation with my aviation mentor, former Ameriflight BE99/BE1900 Captain Abraham Henderson. He informed me of the different pathways available in order to grow my aviation career, including the Ameriflight option.  I immediately applied and received a position at Ameriflight as a First Officer on the EMB120 on January 8, 2018. 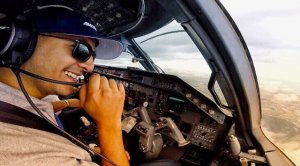 During the first few months with Ameriflight, I had the blessing of flying with some great Captains – K. Cook, G. Alfonso, R. Wilson and J. Parsons among others – who challenged me every day to become as great a Captain as they are. After six months, I was back in Dallas for BE99 Captain upgrade training. 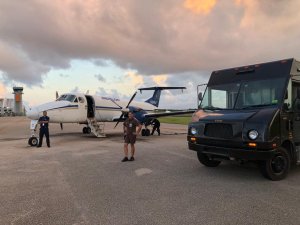 My first takeoff as a single pilot captain in the BE99 was an amazing experience. I flew that aircraft about 6 to 8 months and then upgraded to the BE1900 in May of this year and am now dual qualified in the BE99 and BE1900. I currently fly out of the San Juan base in Puerto Rico and thoroughly enjoy it. The diversity and international experiences are great, not to mention the awesome afternoon sunsets. Some of the most important people at the base, our Mechanics, Dispatchers, and Line Service Agents, go out of their way to make sure I feel valuable and safe. Puerto Rico is great, but don’t get me wrong, Ameriflight has allowed me the opportunity to fly TDY and visit the other amazing bases around the states as well.

Over the years, I’ve learned that every single flight is a new learning experience and the importance of being a safe pilot. The use of strong communication skills and learning how to remain calm and collected, especially during emergency situations, is vital. I’ve learned to never be ashamed to ask something one, two or even three times if it’s necessary to make sure the operation of my aircraft is safe.

My best advice for upcoming pilots is that commitment and dedication are key. Becoming a pilot isn’t a career pathway to take lightly. You must have the self-discipline to stick with it no matter what. Always believe in yourself and have faith in your abilities. Keep confident and humble and never give up!

Previously we featured Captain Kayleigh Bordner. Click here to read how she landed in aviation!