Landing In Aviation With Terrence Braddock

This is how Terrence Braddock landed in aviation. 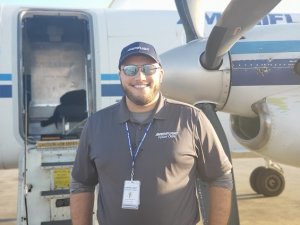 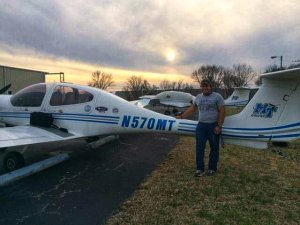 My journey to aviation began at a young age. When I was in middle school, my dad took me to a “Take Your Child to Work Day” event at the insurance firm where he was employed at that time. Seeing the giant offices filled with cubicles turned me off to any kind of corporate career or 9-5 desk job.

After that, I started looking into careers where I would feel less trapped. I became greatly interested in flying and decided to connect with a couple of airline pilots in my hometown. For my 16th birthday, my parents gifted me a discovery flight at our local flight school, and I fell in love. I am a first-generation aviator which was honestly a big draw for me. I enjoyed the thought of taking on a challenge that no one else in my family had.

I began flight training at a small Part 61 school in my hometown, Chattanooga, TN. After graduating from high school, I enrolled in Middle Tennessee State University’s Aerospace program and earned my Commercial Pilot- Single/Multi, CFI, Aircraft Dispatcher certificate, and my Drone Operator Certificate. While studying at MTSU and gaining my ratings, I pledged and eventually became president of the Alpha Eta Rho International Aviation Fraternity’s Mu Tau Chapter. I was also involved with OBAP, EAA, WIA, and the MTSU Air Traffic Control Organizations.

During my junior and senior years of college, I had the privilege of being an Airline Safety Intern for ExpressJet Airlines. While there, I reviewed reports within their ASAP and Crew Fatigue Programs and analyzed data in their FOQA department. 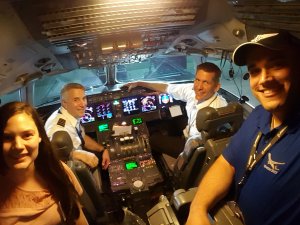 UPS Internship, on the MD-11

Shortly after graduating, I received an offer for a UPS internship opportunity in Flight Operations Technical and Safety. I packed up my things and moved to Louisville, KY to pursue it. I spent a year and a half helping manage databases of pilot guides for all the gateways in the UPS network, as well as analyze data for their flight crew fatigue program. During my time in Louisville, I was also a flight instructor for Louisville Aviation.

Throughout my aviation journey, the biggest hurdle to overcome was the flight training financial hurdle. It’s no secret that becoming a pilot is expensive. I applied for every scholarship I was even remotely qualified for. I also learned how to utilize my federal student aid to help cover my training costs, which came in handy.

Thanks to my internship with UPS, I was selected to be part of the UPS FlightPath Program with Ameriflight. After interning with UPS, pilots fly at Ameriflight for 30 months and then get the opportunity to transition back to UPS as a First Officer. I’m currently in the 30 months of flying at Ameriflight stage of the program. 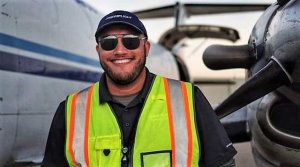 I was officially hired at Ameriflight on January 7, 2019 as a First Officer on the BE1900 based in DFW and have been doing that ever since. Flying with experienced Captains into less than friendly weather conditions has really boosted my confidence in being able to judge whether a flight will be safe or not. I’ve experienced adverse conditions that I never would have as a flight instructor, and the fact that I’m experiencing it in a two-person crew environment rather than as a direct entry Captain gives me that much more confidence in my skills and aeronautical decision making.

I’m coming up on being able to upgrade to BE99 Captain, and I can’t wait. I’m looking forward to the added responsibility and challenges that single pilot flying offers.

Overall, Ameriflight has been a great place to work. The thing I like about working here are the people, without a doubt. I was pretty nervous starting my first real flying job in a new state, surrounded by new people. But I fly with the best Captains, have the best Base Manager, and work with some awesome dispatchers who always have my back.

To any upcoming pilots, my advice would be to never stop learning; aviation always has something to teach you. I can’t even begin to describe how much I’ve grown since I first started flying. I’ve learned so much from my instructors, teaching as an instructor, and during my time on the line as a BE1900 First Officer.

Previously we featured Captain Riki Beauchamp. Click here to read how he landed in aviation!