Landing In Aviation With Kayleigh Bordner

This is how Captain Kayleigh Bordner landed in aviation.

“If you have flown, perhaps you can understand the love a pilot develops for flight. It is much the same emotion a man feels for a woman, or a wife for her husband.” ~Louise Thaden 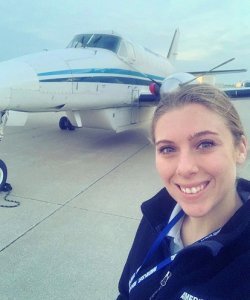 For many of the pilots in the world, our love affair with the wild blue yonder is the one thing that we all share in common. How that love came to be though varies greatly. It may have started simply because a child grew up living next to an airport, or maybe the individual loves the challenges that are presented while trying to master the skills of an aviator. For me, it was a subtle fascination with the sky ever since I was a child that eventually grew into a passion so great that all I can think about it aviation. 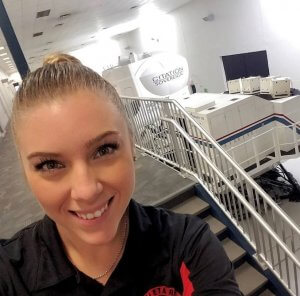 I grew up on a small farm in the middle of nowhere Indiana, as a few people would put it. I loved being outside; whether that was playing with friends, helping bale hay, riding horses… really just anything a normal farm kid would love doing. But I also loved lying in the grass and looking up at the clouds. I would spend hours it seemed like watching the clouds dance across the sky, trying to guess with my cousins what shapes they resembled. If we were lucky, we also got to watch a plane or two buzz by. I loved watching those fascinating flying machines, and any time I heard one I would look up at the sky and try to find it. On top of playing my game of “find the airplane,” my father also started to tell me about his time in the Navy once I was old enough. He had served as a green jacket on the USS Independence, an aircraft carrier that has since been decommissioned. From what he has told me, his days were spent hooking up F-14 Tomcats, A-6 Intruders, and other assorted aircraft to the catapults and recovering them with the arresting cables. He would speak passionately about the sheer power and maneuverability that the fighter jets had, and any time we watched Top Gun he had to turn the volume all the way up on the surround sound while yelling “THIS ISN’T EVEN HALF AS LOUD AS IT WAS ON THE FLIGHT DECK!!” These stories helped to spark my interest in airplanes even more and unbeknownst to me, these were the first signs of what would soon become my life-long love.

I eventually decided I wanted to become a pilot during my freshman year of high school, but it wasn’t until my junior year that I took my first flight lesson. After that first lesson in a little yellow Piper Cub at Glenndale airport, I was hooked! I can still remember my first solo in the Cub. My instructor told me to pull up to the gas tank near the FBO; I was a little suspicious that I would be soloing since I knew I had been getting close. Laura went into the FBO, signed all the endorsements required for me to solo, and walked back out telling me the plane was mine until the end of the flight slot. So there I went, taxiing down to the end of the runway! I did a quite run-up and lined up on the pristine grass, applied power and when the wheel lifted off I thought to myself “that’s it, there’s no turning back, I’m flying an airplane all by myself!” I went on to obtain my private at 18; just a few days before going to college. I can remember being terrified on the check ride. I was so nervous that I could barely think straight! Eventually I settled down and did halfway decent….I mean I must have done alright since the examiner gave me my license! 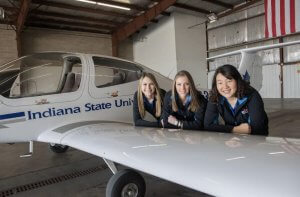 After that I went to Indiana State University for Professional Aviation Flight Technology and Aviation Management. By coming in with my private, I was able to jump into sophomore level flight classes, which gave me the option of graduating early. I decided however to set up my schedule so I could take a light load of online classes my last semester and complete an internship (which is discussed later). While attending ISU, I earned my instrument rating, commercial pilot certificate, multi-engine rating, and CFI. It was difficult times, and I considered quitting more than once. But my love of flying and the desire to become a professional pilot always won out. I also had the honor of being a part of the ISU Air Race Classic team for three years. The Air Race Classic (or ARC) is an all-women’s transcontinental air race that has a rich history dating back to 1929 with Louise Thaden being the very first champion. During the 2016 ARC, my team and I flew our way to a second place win out of 55 teams. The Air Race was an amazing way to apply what I had learned in the classroom to a real life flight. It’s not very often that you get the opportunity to fly from coast to coast in four days unless you have your own airplane and the finances for it. It’s one thing to fly in a practice area or around locally, but when flying a long cross country there are other elements to consider. The biggest element is weather. Instead of looking at the weather in a local area, you have to look at weather covering a vast amount of land. Because of this, I realized how much I had actually learned in weather class and how important it really was to understand. That understanding of weather and working as a team during the 2016 race is what helped us win! 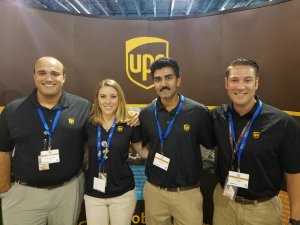 Kayleigh during her time as a UPS intern

I recently graduated from college (about two years ago) and had completed an internship with UPS Airlines during my last semester that extended into that fall. Being a part of this internship was a fantastic way to learn about the Part 121 Airline world. While I was at UPS, I worked as the Boeing 757/767 Flight Training Department Intern! Auditing manuals, analyzing data, assisting on large projects (like taking the UPS 767 to Oshkosh 2017), and giving simulator tours to important customers or certificate winners where just a few of my duties. Upon completion of this internship, I was hired by Ameriflight as First Officer on the Embraer 120 Brasilia based out of Kalispell, Montana (just west of Glacier National Park). My experience as a First Officer was priceless, especially flying in mountainous terrain with some pretty nasty winter weather and encountering icing conditions almost every day during the winter. I loved every minute of it though. I am currently a Beech 99 captain based out of Omaha, Nebraska, flying single pilot IFR. This is some of the hardest flying I have ever done, but the experiences and lessons learned during my time in the right seat have helped me to become a safe, competent pilot while flying as a captain in such environment. I would highly recommend sitting right seat for a while before jumping right into single pilot IFR. You never know what you could learn from a great captain who is willing to share some tips and tricks. 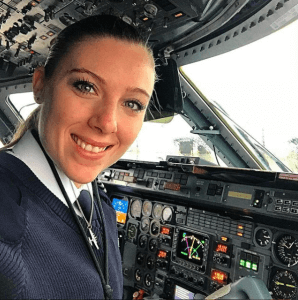 Kayleigh in the EM120

While I sit here reflecting back on the past five years, I know that I have been blessed with so many different opportunities and experiences. But I wouldn’t have gotten where I am today without the help of so many others. My flight instructors over the years have been a huge influence on me and my career. I have so much to thank them for; my training, the techniques I have picked up along the way, and their encouragement when I felt like quitting. I have also had so many mentors who have assisted in my career development. If there is one thing that you take away from this article, I hope it is that you learn to establish good connections and relationships that will help you with your career. Connections are extremely important in any career field. I will leave one last tip as well. On a hiking trip a friend had asked everyone what their key to success was. I thought about it for a while and finally came up with this. To be successful you must have three things: hard work, determination, and the will to never give up. You have to work hard in aviation and be determined to achieve your goals, but you have to have the will to never give up. There have been multiple times where I wanted to give up, but I never gave up!! Everyone has the ability to achieve their dreams, and I know you do too.